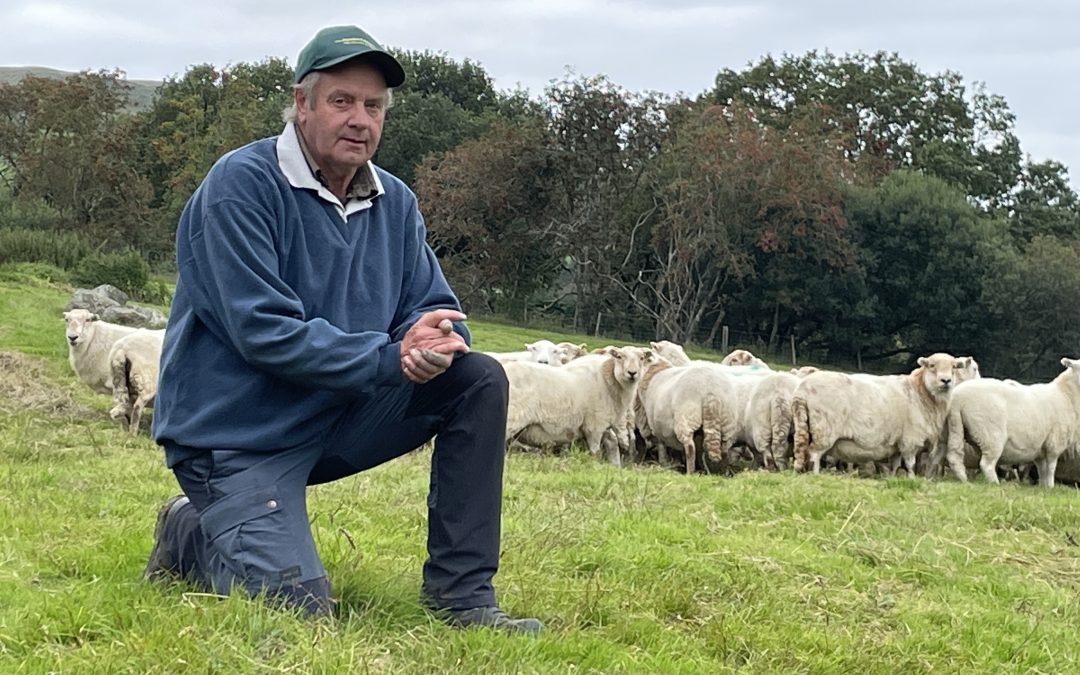 Sheep will continue to remain the lifeblood of the Welsh mountains but only with native hill genetics that are efficient and sustainable – those able to thrive in the harsh environment, says Glyn Williams who farms hardy Meirionnydd type Welsh Mountain ewes – his own 260 ewes and a 1,200-ewe flock he manages on the neighbouring Nantddu estate, near Bala.

“Our Welsh ewes are just that; they’ve evolved here and have that essential hardiness and vigour to lamb outdoors in April and maintain themselves and their lambs on Molinia grasses and heather on mountain and ffridd land,” explains Glyn whose own 215-acre unit stretches from 850’ to 1,950’, around just a quarter is in permanent grassland, and annual rainfall extends to 80” or more.

“Ewes are averaging five crops before they leave for South Wales where they last for another two to three crops, whilst our rams are lasting for between six and 10 years and covering up to 80 ewes a piece. Apart from lambs retained for breeding purposes, the entire crop is finished by the end of the year.” Ram lambs not retained for breeding in 2020 averaged 34.5kgs at finishing.

Last season the flock scanned 138%; losses from scanning to marking were just 8% whilst the lambs averaged 23.9kg at weaning. “There is a growing perception that bigger is better, however with the flock’s mature ewe weight ranging between 45kg to 50kg, that level of performance reflects just how efficient our Welsh ewes are, and they’ve no problem rearing twin lambs. There’s no point in keeping a 70kg ewe that requires a lot more maintenance or one that’s also been selected for colour and markings.”

Glyn had the opportunity to farm in his own right in 2005 with foundation ewes from the Nantddu flock he’d worked with for over two decades, a lifetime during which time he’d honed an experienced stockman’s eye. “I’ve selected rams and replacement ewe lambs by eye and hands-on which has included dense, quality wool cover and spring of rib in ewes that aren’t too ‘leggy’,” he says.

A couple of years ago he joined Meat Promotion Wales’ Hill Ram Scheme and began performance recording which is providing him with extra tools to improve flock profitability. “I’ve had no interest in data recording, however, I thought if the initiative was going to help not only maintain the current genetic pool but also progress the Hardy Welsh Mountain breed, then I’d sign up. Collecting data doesn’t take long, it’s now part of the routine. Expressed in EBV terms, it’s going to provide backup in future decision making, add value to the flock and offer new marketing opportunities.

“In fact, I’ve already found some of my stock rams have Welsh Indexes well above the breed average. However, I’m aware that selection is going to be a fine balancing act between performance data and type; retaining our ewes’ combined hardiness and performance is critical to the future of Welsh hill sheep farming.

“Whilst future payments are heading towards environment schemes including rewilding initiatives, sheep will be essential to manage the vegetation otherwise footpaths will become overgrown and the current landscape the public loves will be wiped. And after all, we’ll still have to eat.”

So far, the scheme has attracted almost 16,000 ewes, members are using some of the latest technology including DNA shepherding, to select and breed from the best performing animals, producing stock with improved genetic potential to supply the UK hill farm sector.

ProHill members are using a new Hill Index, developed by Signet and HCC which combines both maternal and carcass traits, to identify the top performing animals. Lamb performance is monitored from birth to eight weeks, giving an accurate picture of the ewe’s maternal ability, whilst from eight to 20 weeks, growth and carcass traits are measured, highlighting the lambs’ own performance. The gathered data is analysed by Signet to develop various Welsh EBVs to help producers to make more informed decisions in their selection procedures.